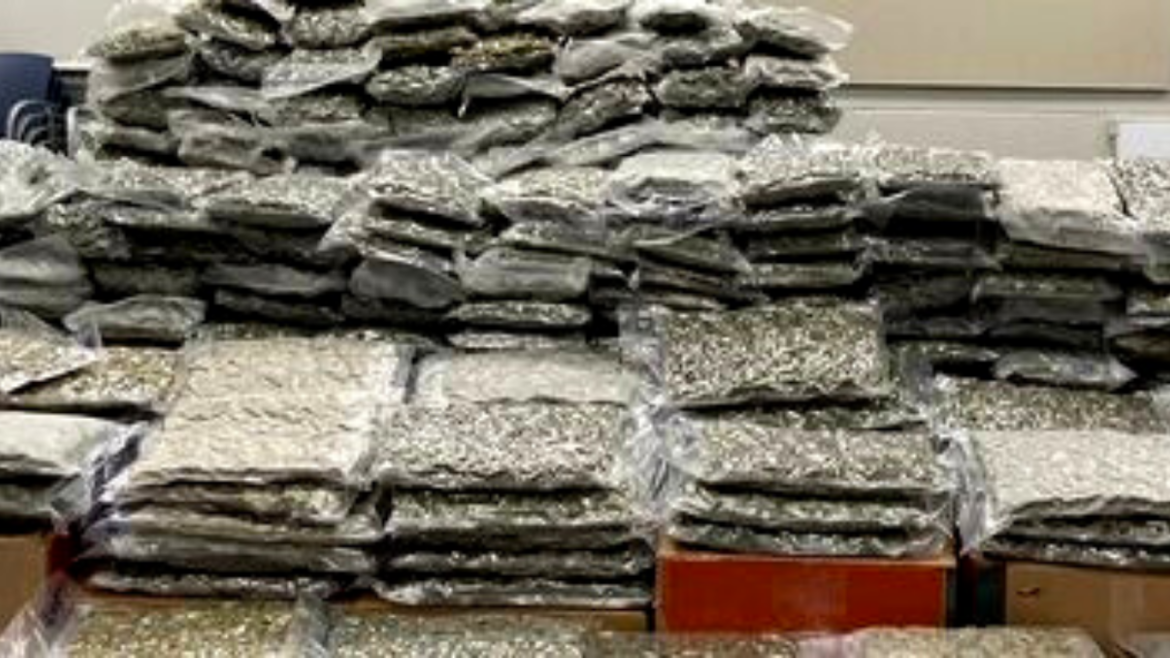 The US has intercepted over 23,000 pounds of pot at the Canadian border since the two nations closed their mutual border due to COVID-19 on March 21.

The majority of seizures have occurred at the Ontario/New York or Detroit border in commercial shipments, although a few were passenger vehicles, and one at the Port Angeles Station in Washington state where American authorities seized a 23-foot Bayliner and 497 pounds of marijuana that entered US waters from Canada. Another involved a man found unconscious in the Detroit River tied to a “bushel” of over 265 pounds of marijuana.

Police place a value on this as over $40 million dollars, at a rate that works out to around $5 a gram, in at least 12 large seizures over the past five months.

Most recently, on August 10 the U.S. Customs and Border Protection (CBP) at the Port of Buffalo seized 3,836 lbs. of cannabis (1,700 kg), manifested as 7 skids of lighting, with an estimated street value of more than $8 million (US).

On August 6 US CBP officers at the Port of Buffalo seized 530 lbs. of marijuana in commercial shipments manifested as Numerical Control Machines, with an “estimated street value” of more than $2 million.

On July 22 CBP officers assigned to the Peace Bridge at the Port of Buffalo seized 2,959 lbs. of marijuana in a commercial shipment manifested as articles of cement that authorities valued at more than $6 million.

On June 25 Americans at the Peace Bridge intercepted 9,472 pounds of marijuana inside a commercial shipment manifested as storage containers worth more than $20 million dollars in estimated street value. Authorities say this was the largest cannabis seizure at the Canadian border in history.

On June 19, 2020 a Canadian citizen driving a municipal waste hauler was referred for inspection after crossing the Ambassador Bridge where CBP officers discovered 418 pounds of pot.

On June 13 American officials at the Peace Bridge discovered around 3,346 pounds of pot hidden among a shipment of peat moss, with an approximate value of $5 million.

On June 5 CBP officers discovered 1,785 pounds of the dank krippy with an estimated street value of $2.5 million in a commercial shipment of coffee makers.

Also on June 5 a man was found unconscious in the Detroit River tied to a “bushel” of over 265 pounds worth of marijuana. According to US officials, he was unconscious and had a tow strap attached to his body, with the other end of the strap tied to a bushel of marijuana. The man had told officials he had been using a submersible device to ferry cannabis, cocaine and cash between the US and Canada.

On May 11 us officials at the Port Angeles Station in Washington state, across from Victoria, BC seized a 23-foot Bayliner and 497 pounds of marijuana that entered US waters from Canada.

On May 8, U.S. officials at the Massena Port of Entry southeast of Ottawa seized just over 31 pounds of weed disguised as large bags of dog food estimated to be worth $60,000.

On April 22 a nurse from Ontario was stopped at the US border with 150 pounds of marijuana while on her way to a Detroit hospital to help them manage the COVID-19 pandemic.

On April 17 Americans found 70 pounds with an estimated street value of $225,000 in a “mixed commercial shipment”.

Canadian authorities also announced more than $10 million worth of cannabis seized from two Ontario warehouses in June, destined for the US. The two seizures were triggered during inspections by Commercial Operations Border Services Officers (BSO) at warehouse locations in Brampton and Mississauga.

The first, on May 22 in Brampton, BSO workers noticed anomalies in a load of gardening mulch to be sent to the US. Employees spent nine hours looking through the shipment, locating nearly 1,500 lbs (685 kg) of “suspected cannabis”.

The second seizure, on May 28, was another nearly 1,800 lbs (800 kg) of suspected cannabis that was hidden in plastic kitchen containers at a Mississauga warehouse. The product was detected by a drug-sniffing dog. The products were also ready to be shipped to the US.

Last year, US officials said they had seen a spike in seizures of cannabis coming from Canada since legalization on October 19, 2018, including one incident of a low-flying helicopter near the border tipping authorities off to 50kg of cannabis in hockey bags hidden in the woods.

Canada has long been an exporter of cannabis to its southern neighbour, with BC bud being a of key interest to the US DEA. It’s unknown if there is an increase in shipments south of the border or simply more seizures with traffic levels being much lower due to the border being close to all but “essential” business and travelers.