Net expenses during this time frame totalled $16.4 million, with the government bringing in $37.8 million in the form of consumer taxes and excise duties collected from producers, that will primarily be reinvested into cannabis research and prevention.

The province sold 18,922 kg of cannabis in those three months, accounting for a reported net income of $9.7 million for the most recent quarter, an increase of $8.4 million over the same time period last year. The province credits the rise in sales to the increase in retail stores, from 16 in June 20, 2019 to 42 since June 2020. The province also has some of the lowest cannabis prices in the legal market in Canada.

The Crown Corp has over 600 employees and collective agreements with the unions representing the employees in 38 of its 41 stores. The province intends to have 98 stores by 2023, with an intention of capturing 75% of the market by that time.

The province estimates it has captured about 40% of the illicit market, based on an estimated total annual consumption of 150 metric tons for Quebec, despite raising the age of access to 21 in October 2019, and banning cannabis sales within 250 metres of colleges and universities, as well as banning edibles like gummies and chocolates, as well as high THC extracts and vapes. Online sales made up about 10 percent of total transactions.

Earlier this year, Quebec announced same-day delivery on the Island of Montreal for purchases made on the SQDC.ca website. Following this first step, the company plans to expand coverage to other areas with a large enough population density to support the service. As at March 28, 2020, the SQDC had invested $13.8 million in opening new stores.

The province says that although COVID-19 has led to a decrease in the number of transactions, consumers are buying more with each transaction.

The interim financial report for the 12-week quarter ended June 20, 2020, is now available in the Publications section of SQDC.ca. 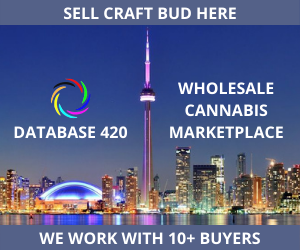 Black Kettle Farms in Langley, BC