Brad Churchill, the founder and CEO of Choklat, had been making chocolate in Calgary for more than a decade before he decided to try his hand at adding cannabis.

After making some renovations to his existing chocolate processing facility to bring it up to compliance with Health Canada’s cannabis regulations, he applied in mid 2019, receiving his standard cannabis processing licence in January 2020.

He then found a new location nearby to relocate his non-cannabis production facility, in line with additional federal regulatory requirements separating cannabis and non-cannabis food production, to continue processing his non cannabis line of products.

“We took our existing chocolate manufacturing facility and added a camera system, painted some walls and put some locks on doors, and then found another building down the street to move our conventional processing to. It was a relatively low cost transition for what I hope to be a high margin gain.”

Entering into the cannabis industry as an edibles manufacturer with that much experience is a big advantage, says Churchill. Not only did he already have a facility in place, but he had the infrastructure and knowledge of what he was making, aside from the process of adding cannabis.

Part of the value he brings to the cannabis space is his process for making chocolate from raw cocoa beans, rather than buying premade chocolate. Grinding and mixing all the ingredients together from scratch allows him to mix in cannabis distillate at an early stage, ensuring what he says is a much more consistent distribution of cannabinoids than many conventional approaches.

“We start before other chocolatiers do,” explains Churchill. “We don’t buy chocolate that’s already melted down. We buy the cocoa beans, we roast them, we grind them in refiners—where that process is violent—for two to three days. We put the cannabis in the machines at exactly the same time as the other ingredients, rather than into melting tanks after the chocolate is made and where the agitation is very slow and mild.

“Something that makes us unique is that when we mix the distillate in, because we actually make the chocolate right from the cocoa beans, we have a unique process that grinds everything down into small particles. At the end, if our goal is ten milligrams per chocolate bar, we’re seeing measurements of 10.06, 9.84, 9.9… consistently across the board, without fail.”

Although he faced some challenges getting his products to market as early as he had hoped, due to a deal with a previous partner not working out, he’s now signed a deal with fellow Albertan cannabis processor, Sundial Cannabis. The distribution agreement utilizes Sundial’s sales license and connections with retailers to get their product to market and allows Churchill to do what he does best; make great tasting chocolate and confections. Churchill says he expects his chocolate bars, hot drinking chocolate mixes, and infused sugar to start rolling out in early December.

The partnership with Sundial is unique, he explains, in that Choklat is able to package and even affix the excise stamps to the products themselves and ship them directly to a retailer, utilizing Sundial’s sales license without Sundial having to physically touch the product.

“It’s saving a tremendous amount of money, especially given the cost from retail boards, shipping, etc.,” he says. “It’s allowing us to minimize the number of hands that have to touch it in the process before it reaches the consumer, which is better logistically and from a quality assurance perspective.

“It’s taken a long time for our partner’s QAP and our QAP to make sure that everything will be handled in a certain way so they can put their stamp of approval on it.  The regulatory process and fear of Health Canada has been almost paralyzing. As a food manufacturer I have dealt with both our local health region and also the Canada Food Inspection Agency for 12 years now.  The regulatory framework required by Health Canada, the delays Health Canada causes,  and then the lack of guidance for what is a simple product: a bit of cannabis oil in a chocolate bar…  Well…. This venture has almost destroyed my business.”

Despite some of these delays, he says retailers are eager to get his product, and he feels confident that he can compete with larger producers both in terms of margins, as well as quality and taste. Choklat will be offering three products; a chocolate bar, chocolate mix, and infused sugar.

“We’re focusing on the three products that we’ve been doing for twelve years. We can do it efficiently and with a very small footprint,” he says. “That allows us a little better margin than a larger producer that is making their chocolate bars in a fifty thousand square foot facility where their production line is running at a fraction of what it’s spec’d to do.”

His own facility, he says, can put out up to 48,000 chocolate bars a day, along with a metric ton of infused sugar and infused hot drinking chocolate a day.

As someone who has operated essentially the same business both with and without cannabis, Churchill has a unique perspective on the comparison of cost and regulations between these two industries. 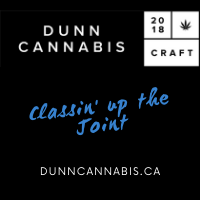 “Aside from the delays, exorbitant costs, and regulatory hurdles, there are other challenges,” says Churchill. “One is the lack of inter-industry knowledge.  Testing requirements for edibles is very different than other cannabis products.  There has been a huge burden placed on us to educate other Quality Assurance staff about food regs.  Another is the inability to taste-test products.”

When making non cannabis products, he says, he can sample the product to ensure the recipe is good, just like many other industries, but with cannabis infused into it, he can’t unless he has a research license.

“We’re not allowed to sample the chocolate. In the tea industry, you have cuppers who are the ones who design and create the blends of tea by tasting the tea. In the beer industry or the wine industry you have a Brewmeister or a vintner who is responsible for sampling the wine as it’s aging, or sampling beer as it’s being fermented.

“So how do you make a food item and do quality verification on that food item?”

Ideally he says this is an aspect of the regulations that will need to be changed in the coming years to allow for more realistic manufacturing practices.

Churchill says this was another area where his past experience was a benefit, since he could experiment with recipes in his non cannabis factory to get taste down. Then, utilizing a personal medical licence, he could use that recipe at home while mixing a refined cannabis product to come up with a recipe he could then replicate in his cannabis processing facility.

Rather than growing or processing any cannabis themselves, Choklat simply buys cannabis distillate from another processor and mixes it into his existing recipes.

“There are companies out there that grow great weed, but have no clue about food science and making something taste good. We’ve been making a luxury product for twelve years and we’re some of the best in the world at it. I don’t profess in any way, shape, or form to grow good weed or even produce good distillate, so I rely on another company to supply me that.

“But we do know how to make good chocolate, and I think when consumers finally get a chance to try our products they’ll taste the difference.”