Mark Parker grew up in Nova Scotia working at his father’s commercial greenhouse, growing ornamentals and vegetables of all kinds. Now, he’s adding cannabis plants to the mix.

West River Cannabis, Parker’s new cannabis nursery near the West River of Pictou in Nova Scotia, sits next to his father’s nursery, West River Greenhouses. Although just licensed in April, he hopes to soon begin selling cannabis clones to commercial growers and eventually even the consumer market.

The entire licensing process took him about three months, he said, but he spent approximately two years prior to that coming up with a business plan, constructing his indoor and outdoor nursery space, and working through the application process. All in, he estimates it cost about $130,000, including the new buildings, licensing fees, equipment, land surveys, etc.

Parker, now 42, says he first became interested in cannabis after a back injury about ten years ago that required surgery and left him with severe pain. A friend recommended he tried cannabis and he found it much more effective than the pharmaceutical medication being offered and said he found new respect for the plant. He’s been growing cannabis for himself for medical purposes for eight years now.

Micro licensing made it affordable

Although he had looked at the commercial licensing process as far back as 2013, he says he always felt it was too complex and expensive. But when he saw new license categories like micros and nursery, he decided it was time to finally do it.

“It just seemed too difficult. Every time I looked at it it seemed like I couldn’t figure out a way in. Then about two years ago we started looking at it again, when they announced they were coming out with these micro operations. That’s when I knew this was something affordable to get into.”

Using a property adjacent to his father’s existing greenhouse, Parker built a 30 x 40ft2 indoor facility, as well as a fenced in area outside encompassing another 30 x 20ft2. He found some help with the licensing process where he needed it, and got down to work moving from an idea to a licence.

“I’m hoping we could get to the point where I could sell to other garden centres around the province or around the maritimes who could then sell to their customers.”

Bringing in an “extensive catalogue of genetics” in the form of mothers and seeds, he says he’s looking forward to getting started with cuttings from his mothers and hopes to build up to handling a few thousand clones a month. In the meantime, he says he’s already been talking to other licence holders and applicants in the area, as well as to the provincial distributor about some of his hopes for the consumer market, with their approval.

Although he thinks it’s still in the early stages, he hopes to one day either sell them through the province in some way or, ideally, with some changes to the provincial rules, to sell them from his farm or even through other commercial greenhouses like his father’s, helping to supply new and unique genetics to home growers in the area.

“I’m hoping we could get to the point where I could sell to other garden centres around the province or around the maritimes who could then sell to their customers. So, definitely if that’s something that becomes available, we would be super interested in that.”

He is also in the process of applying for a micro cultivation licence on a nearby property. If successful, he could be supplying his clones there as well. Although Parker says the licensing process wasn’t as quick as he first thought it would be, now that he’s done one it’s given him the confidence to start working on a new one.

He says he hopes others start to take the leap, too.

“They make it look way harder than it is. The more you get through it, the more you start to realize, ‘If I do another of these I could really whip through it.’ You’re still going to need somebody to do the things you don’t know how to do. If you don’t know how to write SOPs, then you at least need somebody who can supply you with templates and stuff. But, really, just go for it.

“It’s not like opening a Tim Hortons, where you can look at other Tim Hortons and see how they did it. You’re kind of going by the seat of your pants because there’s hardly anyone who’s done it yet.”

Challenge of being a small business

Although he did get some help from people with aspects of the regulations, he said one of the biggest challenges was finding people who were willing to work with such a small business.

“It’s not like opening a Tim Hortons, where you can look at other Tim Hortons and see how they did it. You’re kind of going by the seat of your pants because there’s hardly anyone who’s done it yet. You’ve got those big company’s doing it, but there’s no comparison to setting up a small company like this.”

One day, he says, he hopes to expand into his father’s greenhouse and operate both businesses together, ideally selling cannabis plants along with hostas and lettuce starts and hanging baskets. In business for nearly forty years now, he says they’re excited by the idea of him continuing the business and bringing in something new that he’s so passionate about.

“They’re super happy about the whole idea. They’d like somebody to take over the greenhouse and they know this will keep me interested, so they’re pretty excited about the whole thing.”

Some of the first clones he hopes to have available will be cuttings of Pineapple Express, White Widow, White Cookies, Chocolate Mint and White Rhino, and then he hopes to begin breeding seeds, as well as continuing to work towards his micro cannabis licence. 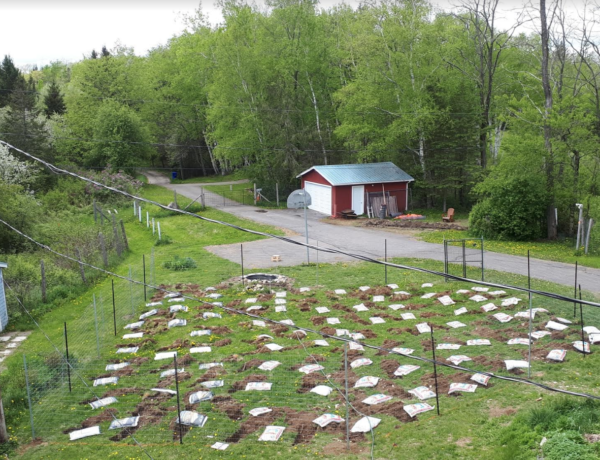