Thanks to our sponsors for supporting StratCann’s work!

Editor’s note: This is an update on an article StratCann ran in 2020, using data collected by CannStandard, showing the price in the legal and illegal cannabis markets in Canada. Many of the same issues from that first article remain true: Despite some claims that the black market is significantly cheaper than the legal market, prices in these different streams are actually fairly close.

The data presented in this article comes from scans of online sources in the legal and illegal market, from provincial retail sites, illicit online sellers, and online aggregators. While there are examples of high- and low-end exceptions to every rule in pricing, these figures pull from a wide array of sources to draw a clever average. Prices, regardless of the source, tend to be around $10 a gram. Some are much lower, some are higher.

Sidenote: In this article, the term ACMPR is used to refer to those selling within the commercial medial stream. The Cannabis Act replaced the ACMPR. Data collection from CannStandard for the “ACMPR” stopped in April 2019.

We’ll look at average prices from both legal and legacy sources previous to Canada’s cannabis legalization. And we’ll compare those values to the prices we can observe from both sources after legalization.

We’ll also look at bulk discounts offered, with respect to each data source to see how price changes with package size, where the best bulk discounts were offered, and how things have changed since legalization

The average price for all listings and package sizes included is $9.74 per gram.

Below we’ve shown the monthly moving average price, as observed from each source.

Generally, less expensive prices can be assumed with increasing amounts of cannabis being purchased. This trend can be observed in the bar graph below, where we’ve averaged price per gram by package size, and shown the percent difference in price between each size.

An increase in package size purchased garnered at least a 23% discount in unit price.

When purchasing an ounce, over all sources, the average bulk discount over the 1g-3.5g package size is observed at 50%.

Next, we’ll look at price averages from each source in-depth, and see how bulk changes from each, and with time.

Thirty-four producers were tracked manually starting September 2016. We continued tracking these sources until August 2019, about one year after the ACMPR was replaced by the Cannabis Act.

Data from this source was generated from producer websites; it doesn’t include a medical store that would list many producers.

The average price tracked for this section of the market ($9.26 per gram), falls below the historical average for the entire dataset. Average price increases with time, and this rate increases in October 2018, when the new legislation is adopted. 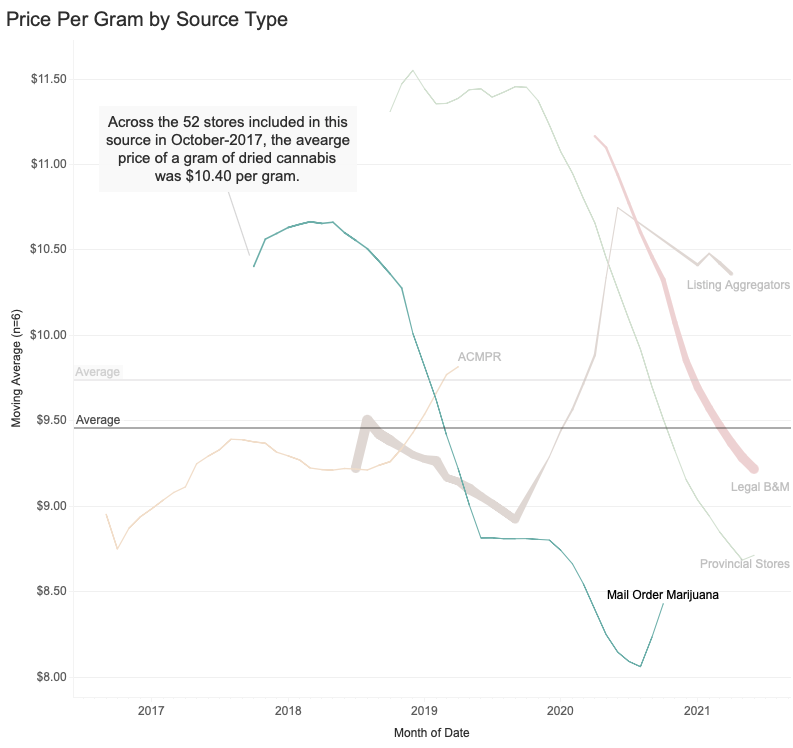 Generally representative of legacy vendors, this dataset includes prices from 52 sites from October 2017 to October 2020.

Dried cannabis packages are sold in traditional fractions of ounces in this section of the market. Bulk discounts average 25% from an ounce to a gram, bringing the price down to $7.21 per gram. A good bulk discount would be 45% from a vendor in this category.

Prior to Canada’s legalization, listings for legacy vendors could be found on the two largest cannabis marketplaces, Weedmaps and Leafly. Both large listing aggregators delisted unlicensed vendors after legalization.

Grouping a mix of licensed and unlicensed vendors across the date span (July 2018 to April 2021), the average price observed was $9.57 per gram.

In July 2018, there were just over 900 stores listing products on one of the two marketplace websites, we observed the average at $9.22 per gram. Since the start of 2021, we’ve observed just over 300 stores with listings on these marketplaces, with an average price of $10.42 per gram for their listings.

This data source typically lists dried cannabis products in traditional fractions of ounces, although that has changed recently. Bulk discounts average 25% from an ounce to a gram.

Good bulk discounts can be found in the 45%-55% range, and are becoming more frequent in this section of the market.

Legal recreational cannabis listings first appeared on provincial websites in October 2018, since then, the historical average price has been $10.48 per gram.

The average price ($11.31 per gram, October 2018) started above the average price observed across all sources in the dataset ($9.47 per gram) but has recently decreased below average to $8.68 per gram.

Flower packages are traditional sizes, fractions of ounces, and nontraditional increments of 5.

Bulk discounts and larger package sizes were rare during the first year of legalization, a year later they became more common, and very competitive in late 2020. On average, an ounce purchase in this section of the market brings the unit price down to below $4.75 per gram, or 55% less than the 1g or 3.5g price average ($10.63 per gram).

In 2021, average price discounts are comparable to the maximum values observed previous to legalization. Some producers also offer a 21g package size, with a deeper discount than the 28g average.

Our tracking from listings in legal bricks and mortar stores started April 2020, increasing from just over 100 stores to over 700 stores. 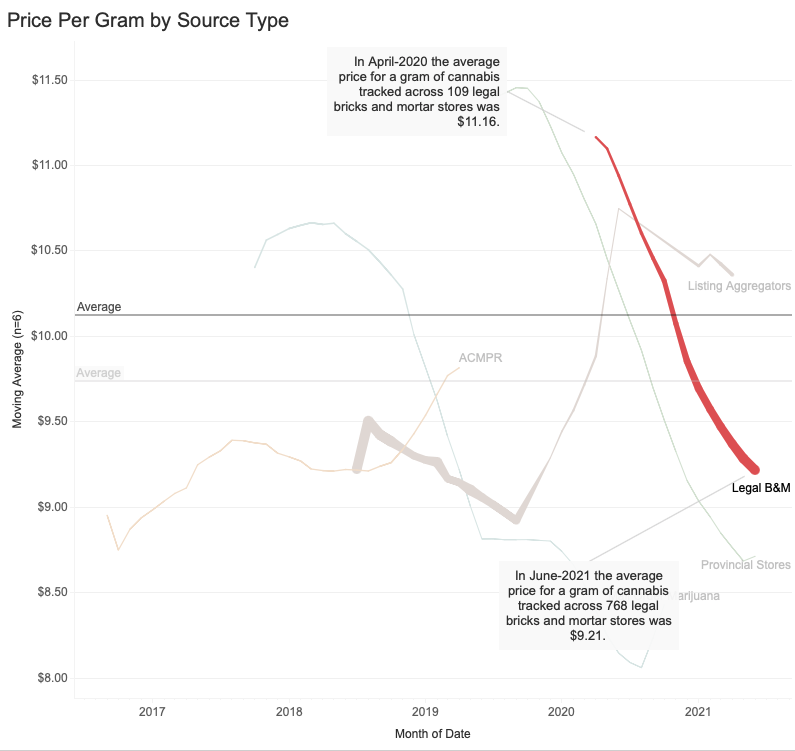 Package sizes offered mirrors what can be found in provincial stores; traditional sizes, and nontraditional increments of 5.

Bulk discounts average 55%, or $4.69 per gram, the lowest average price observed for an ounce product from any of the sources covered.

Prior to legalization (September 2016 to September 2018), we observed the price per gram of medical cannabis from the small number of legal producers at $9.18 per gram, in a 5 gram package size.

Within the same window, the price observed across all package sizes from several hundred MOMs and legacy vendors on Weedmaps and Leafly was $10.28 per gram.

At the start of legalization listings for legal recreational products were listed above the historical average, but have decreased below the average since September 2020. The initial average from October 2018 to April 2020 was $11.02 per gram from legal recreational provincial stores and bricks & mortar, compared to the historic average for the database at $9.74 per gram. Within the past 90 days, the average from these sources has decreased to $9.00 per gram.

On average, current bulk discounts are double what was observed prior to legalization from legacy vendors.

As of May 2021, bulk discounts from legal recreational sources are about 55% on average, and the number of listings offered in this category has grown to above 50, which is about 5% of the variation tracked from listing aggregators and Mail Order Marijuana prior to legalization.

Thanks to our sponsors supporting StratCann’s work!

Thanks to our sponsors for supporting StratCann's work!

If you'd like to support independent cannabis industry media, we have a simple way you can donate to our work!!

Donate Now
ADVERTISE WITH US
Put your business, brand and expertise in front of the Canadian cannabis industry.
Ask us how
Are you of legal age in your jurisdiction? By clicking "Enter" you are verifying you are of legal age to view the content of this website, or click "Exit" to leave.